A kettle whistles, releasing a plume of steam. Hot water swirls over a wire mesh basket, plumping whole tea leaves, unleashing their aroma as steam rises from the teacup. The ritual of tea begins anew. Scratch that—all of it. Forget what you think you know about tea. We’re pulling the doilies out from under the teapots. Steeped: Recipes Infused with Tea* encourages experimenting with tea in cooking and baking as another flavor in a cook’s culinary color box. Invite tea into every meal of the day through 70 plant-based recipes. Get steeped.

*Named one of the Los Angeles Times’ favorite cookbooks of 2015. 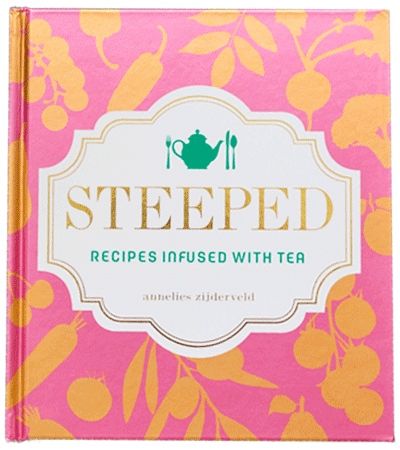 For Booksellers and Librarians:
If interested in purchasing Steeped for your store or library, please contact the publisher, Andrews McMeel.
The ISBN-13 number for Steeped is 978-1449464974

“Steeped is smart, inventive, and most of all, inspiring. I’m a coffee person most days, but Annelies has got me daydreaming about the possibilities of tea, from Sweet Tea Jelly on toast to California Tea Leaf Salad and Arnold Palmer Poppy Seed Muffins.  This beautiful book deserves a spot next to your teacup.”

Author of Delancey and A Homemade Life

Get infused with Steeped news

Steeped in the News

Half Her Size Book Review: “Steeped: Recipes Infused with Tea, came out last month and it is a joy to thumb through…I have already repeated the Smoky Tomato Soup for my family.“

Go Dairy Free: “it’s still a gem, in my opinion, for any tea lover or person interested in a little culinary adventure.“

The Blender Girl – “Annelies Zijderveld takes the home cook and reader on a culinary journey of discovery that is innovative, creative, and refreshing.”

EAT Boutique: “It was about time someone took all of this wonderfulness beyond the mug and created everyday recipes using tea.”

A Gutsy Girl, “(for tea aficionados): “This is such a cool concept.”